A series collects and retells the story of the ancestors of all South Africans.
Find out more

A recently discovered collection of writing of South African culture and history.
Find out more

This siege took place at the beginning of what was then known as the Anglo-Boer war. For a long time it was considered a ‘white man’s war’, but was not, because it affected everyone who lived in South Africa, ultimately costing the Boers the war. This is the story of the siege from the perspective of the people who were intimately involved in it – the Barolong. Mafeking is remembered as the town which gave birth to the expression, ‘to maffick’, which means to celebrate excessively. 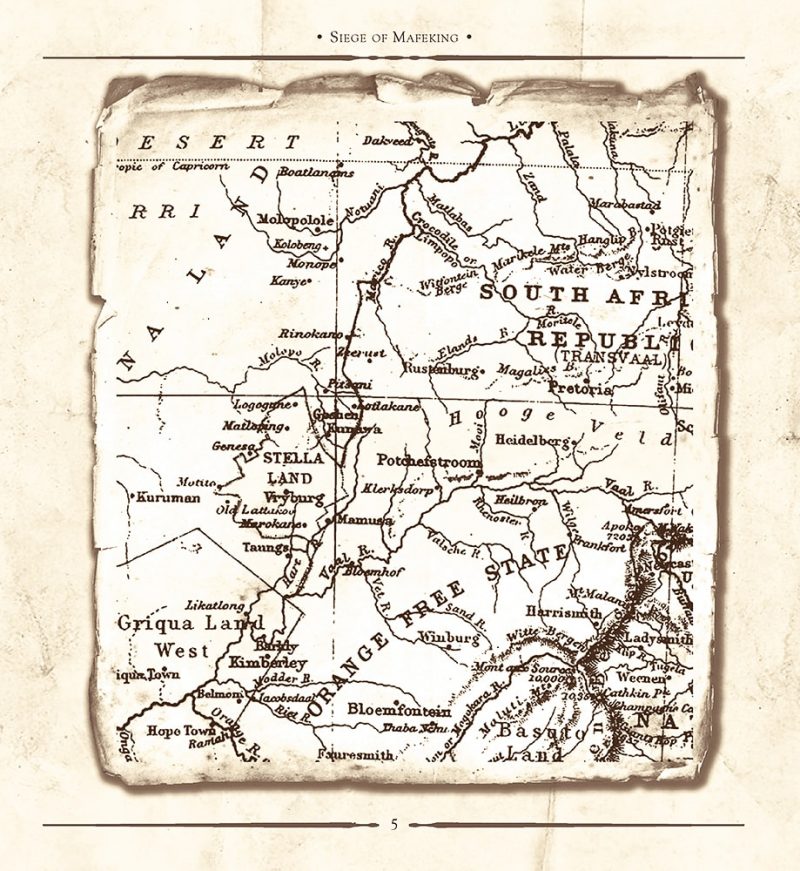 The Siege of Mafeking

This long-drawn out siege was pivotal in the war that was supposed to be between the British colonial forces and the Boers. It was inevitable, though, that others would be drawn into the conflict. In spite of being warned not to meddle in the ‘white man’s quarrel’, the Barolong were severely affected by the Siege of Mafeking. This extract tells something of this battle which was to decide the outcome of the Anglo-Boer war and, in so doing, impact on all those who lived in South Africa.

On that first day, the shelling continued for four hours and then stopped. The townspeople saw a man approaching, holding four white handkerchiefs tied together like a flag of truce. An Englishman called Everitt carried the flag. He was fighting for the Boers. People brought Everitt to the market square where Baden-Powell was waiting for him. A large crowd gathered. Everitt handed Baden-Powell a note from Kommandant Snyman and Baden Powell read it out loud. It demanded that Baden-Powell immediately surrender the town ‘to avoid further bloodshed’. Baden-Powell was such an actor! He pretended to be amazed and looked at the faces of the people all around him. ‘When? When will the bloodshed start?’ he asked.

This initial shelling was made worse when people heard about a wagon, pulled by four oxen, that was carrying an enormous gun in the direction of Mafeking. It was a French Creusot Siege gun that no-one had seen before. However, they had heard about it. This gun was placed to the south of Jackal Tree Hill on a platform that had been specially constructed for it. The Boers called the gun ‘Grietjie’, but the townspeople called it ‘Old Creaky’. The Boers fired missiles from ‘Grietjie’ regularly. The lookout on Cannon Kopje would report that the gun barrel was being lifted and pointed and an alarm would jangle through the town. The residents would scurry for shelter. Half an hour later there would be a boom, a screeching rush like an express train overhead, and then a thudding explosion, followed by silence.

This was the opening phase of the siege and lasted for five weeks. In the end, this was to cost the Boers their victory in the war. Although the Boers had surrounded Mafeking, the Boer circle was porous. There were gaps that allowed people, such as the runners and Barolong scouts, to get through unnoticed. During the opening part of the siege, Baden-Powell had more trenches dug and more fake ‘minefields’ extended.

There were many fierce battles during the first weeks of the siege. There was shelling almost every day. The only day when shelling didn’t take place was a Sunday. It was a wonder that there were not more casualties among the white residents. This was partly because the Boer lines were a few kilometres from the town and they were unable to direct their fire. They also couldn’t tell which trenches were manned by real troops, and which by dummies. In addition, the sandy soil also absorbed much of the shock and the buildings were mainly single-story buildings made from clay bricks and mud. This meant that they did not collapse easily. As long as the residents took shelter, they could reduce their risk of harm.

Black workers, mainly the Shangaan refugees from the mines, constructed bomb-proof shelters. These shelters had roofs of steel and corrugated iron, topped with sand and covered with tarpaulin.

More black residents of Mahikeng died than white ones. This is most likely because Baden-Powell did not make iron or steel available to them to construct their own shelters. What is even worse is that he took whatever they had in order to construct bunkers in the white town.

Because of the system of lookouts who would observe the guns when they fired, as well as the ringing of alarms, most white residents were able to get to shelter in bunkers in time. The psychological effect of the shells was worse and affected many of the residents.

‘What about the defenders? How many were there and how were they armed?’ asked Refilwe, always concerned about such matters.

500 armed Barolong and Bakgatla defended the town of Mafeking.

Well, when the siege started there was a force of about 1230. These forces were reasonably equipped with rifles, but they were very short of artillery. They did, however, have four rather old seven-pounders, one one-pound Hotchkiss, one 2-inch Nordenfeldt and seven Maxim guns. In addition, once the siege started, a contingent of about 500 Barolong assisted with the fighting. In fact, throughout the war, 500 armed Barolong and Bakgatla defended the town of Mafeking. On one occasion they attacked and overran a Boer fort opposite them.

‘Now one thing I must tell you is that before the hostilities started the Boer general Cronje had sent a note to the Barolong chief to tell him not to mix himself and his people in a ‘white man’s quarrel’.’

On 25 October over 300 shells fell on the town. Then Cronje’s troops began their advance through the village thinking that it would be safe to attack the town through Mahikeng stadt. The British Captain Marsh and his squadron of 400 armed Tshidi warriors were waiting for them. The warriors, concealed behind the outer walls of the village, waited with their rifles in the loopholes to fire on the attackers.

The remaining hundred armed Tshidi warriors were in the frontlines, with the Cape Police, defending the north-east. The town would have fallen on 25 October had it not been for the heroism of the black residents.

To find out more about the Sol Plaatjie, who was in Mafeking at the time, and Mathakong, a cattle rustler who helped ward off starvation, ask your bookseller to order your copy of The Siege of Mafeking. For a story of a lesser known siege, take a look at the extract from The Siege of Leboho.